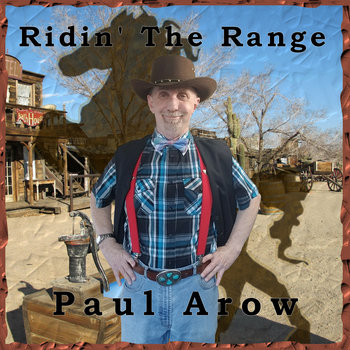 The Story Behind “Ridin’ The Range”

“Ridin’ The Range” is song about the American cowboy. The song also reminds us that we live and share our range together and to respect each one the same. There are various images and meanings throughout the song. These are based on the history of the cowboy and includes such things as cowboy way of life, how they drove cattle across the range, life on the trail, team diversification, attire, and music.
Cowboys signed up for cattle drives shortly after the civil war to aid with the increased demand for beef. Cowboys were a loyal hard-working diverse team with a mixture of race and color comprising African Americans, Native Americans, Mexicans, and eastern settlers. They drove cattle across the western United States from Texas to Kansas where the cattle were loaded on trains at railroad depots. The days were very long, and they only traveled 25 miles a day. They made $25 dollars a month. Along the trail the cowboys would stop at local towns. The ladies they met were referred to as sparrows. Cowboys carried a dreambook, which is small packet of papers used to roll cigarettes. An eagle refers to a ten-dollar gold coin.
Cowboys worked in teams and wore large brimmed hats for sun protection. Chaps covered their legs to protect from cactus and rocky terrain. They wore special pointed boots that were designed to fit in the stirrups of the saddle and carried six shooters on their side for protection. Each cowboy took along several horses on the trail so they could swap out a tired or overworked horse. They sang songs and played guitar and harmonica for entertainment and to soothe the cattle.
Cowboys had a code of ethics and knew love and pain, and never cared about fame. The code included such things as courtesy, always saying howdy, do not wave at a man on a horse but instead nod, help those in need, never wear another man’s hat, never ride another man’s horse with asking permission.
Vaqueros were rough, hard-working, skilled Mexican cowboys hired to help drive the cattle. Vaquero is a translation of cow (vaca). Segundo means second and they were the most experienced cowboy riding next to the trail boss. Waddies were free rangers and drifters and helped out in busy times. Nighthawks were cowboys who rode around and watched the herd at night. They drew lots for who would stay on night watch.

Find Love In Her Soul (Single)

Gonna Be A Sunny Day (Single)

She’s The Love In My Eyes (Single)